The Creators of Dragon Knight 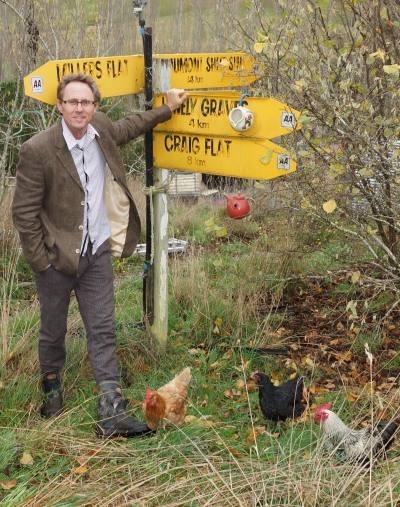 (pictured with his chickens!) has had over 40 children’s books published in nine countries. His work has won numerous awards, including the NZ Post Children’s Book of the Year award for Old Hu-Hu. His other titles include Kiss! Kiss! Yuck! Yuck! (winner of Best Picture Book and Children’s Choice at the 2008 NZ Post Book Awards), Melu (Children’s Choice winner at the 2013 NZ Post Book Awards), as well as the popular series collaboration with Donovan Bixley, Dinosaur Rescue. Originally from Brisbane, Kyle lives with his wife in Central Otago.

Have you ever met a shape-shifting dragon?

I’ve always suspected my step-mother is a dragon, but I don’t really have any actual evidence. I’ve never actually seen her eat a baby or anything like that. But she does have bad breath that smells like smoke and when she makes dinner it often ends up being burnt. My High School 10 maths teacher might have been a dragon too because there was always smoke coming out of his nose.

What do you think would be the worst torture?

Being made to read a very boring book would be one of the worst tortures I can think of. Though getting eaten by ants would be pretty bad too. Being forced to sit on a red hot poker would be kind of uncomfortable as well. For some reason people are very good at inventing new tortures, especially medieval people.

Which are cooler – dinosaurs or dragons?

That’s a tough one. Dinosaurs are pretty cool, even though it’s really hard to spell most of their names. Why can’t they just be called things like Biggrumpysaurus and Spikybutcuddlysaurus? I suspect a dragon might beat a dinosaur in a fight because they can breathe fire and fly. I think shape-shifting dragons are definitely the coolest creatures around … though that’s possibly because I invented them!

If you lived in medieval times what job would you like to do?

Lots of people would probably say I’d be a Court Jester, but I’d much prefer being a travelling Bard or Minstrel. I’d get to travel around the country telling stories. The only problem is I can’t sing or play a musical instrument. And I’d probably end up being stretched on a rack or burnt at the stake because I made up a story insulting some evil Lord.

Would you be a good Knight?

Hmmm, I’m not sure. I think I’d be good at following the Knight’s Code because I’m always polite and often stick up for the weak. Just the other day I killed a stoat that was trying to eat my chickens. I used to get in a lot of fights when I was at school, but I try to avoid them now – mainly because I don’t like getting hurt. And I’m sometimes a bit clumsy, so if I got in a sword fight I’d probably end up cutting off my own nose. 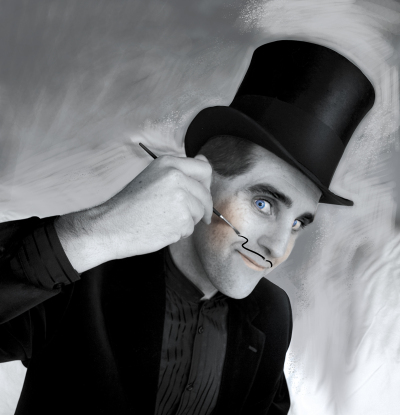 (with his paintbrush!) is a talented artist with a range of styles. His work brings another dimension to Kyle’s text, often adding hilarious bits of his own to enhance the storyline. Along with Dinosaur Rescue, Donovan has illustrated a number of picture books with Scholastic, including The Three Bears Sort Of, Phoebe and the Night Creatures, Kiwi Corkers Wacko Kakapo and The Tuatara and the Skink, and Monkey Boy, his debut comic book/novel as author and illustrator. Donovan lives with his wife and young family in Taupo.

Have you ever met a shape-shifting dragon?

Of course! Who do you think poses for all the pictures in Dragon Knight? In fact, I just saw a giant slug chomping into my cabbages  and I’m pretty sure it was a shape-shifting dragon.

What do you think would be the worst torture?

Sure, there are plenty of really disgusting and horrible tortures, but a real torture is something that goes on all day, every day, for your whole life.

I think the worst torture would be having to live in medieval times and eat the food. I mean, imagine living in Europe before America was discovered – before potatoes, tomatoes, or chocolate – there’d be no chips, pizza or Toblerone! Only brussels sprouts, turnips and asparagus. Arrgh, the torture … what’s the point in living!

Which are cooler – dinosaurs or dragons?

Dinosaurs, of course. Everyone says that birds are descended from dinosaurs, but it’s really just a conspiracy to stop people tracking down shape-shifting dragons living all over the world. Dragons are the true descendants of the dinosaurs. I know this because a shape-shifting dragon, who was disguised as a giant slug chomping on my cabbages,  told me … mainly using body language and a few grunts.

If you lived in medieval times what job would you like to do?

I would seriously love to be an armour designer. Plate armour is an incredible combination of beautiful art and functionality. I think it would be an amazing thing to create. Plus, I really love swords and daggers – I have a small collection of them.

Would you be a good Knight?

If I were sent back in time right now to be a knight, I would be terrible. I’m not nearly brawny enough to wear a massive suit of armour and I’d probably muck my pants if I was ever in a battle. Besides, I’m not nearly violent enough to poke a sword into another knight’s visor or hunt down innocent dragons. Which is a shame, because I really like swords and armour and horse riding.

However, if I was a child living in medieval times (assuming I’d survived the plague and famine and older brothers), and I could attend Sir Bragalot’s knight school, I’m sure I’d be a brilliant knight.